This week we bring you E. A. Black. 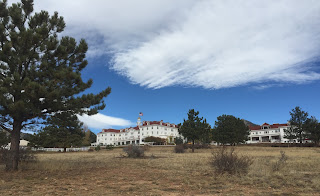 Real Locations For Famous Horror Stories
By E. A. Black

I'd like to thank New England Horror Writers for inviting me to post during Women In Horror Month. So far, my horror writing has consisted of short stories with topics running the gamut from infectious disease to crazy cat ladies. I've been published by small presses. My story "Fog Over Mons" appears in "Wicked Tales: The Journal of the New England Horror Writers Vol. 3".

I used to work in the movies and on TV. I mostly worked as a gaffer (lighting) but I also did scenic painting and makeup including F/X. I did lighting for "Die Hard With A Vengeance" and the movie "12 Monkeys". I did makeup for the TV show "Homicide: Life On The Street". I also did crew work for a slew of concerts and stage shows. So the making of movies and TV has always interested me. I also like to travel, especially to haunted locations, so I always check to see where something is filmed. More often than not it's a sound stage but sometimes there are real locations involved.

THE HAUNTING OF HILL HOUSE

I'd wanted to know where 1963's "The Haunting" was filmed ever since I first saw the movie when I was a child and read the novel later as an adult. I wanted to know what influenced Shirley Jackson to come up with such a fun house of a haunted mansion. Turns out she may have been influenced by the Winchester Mystery House in San Jose, California. I've been there twice. This rambling mansion has doors that open into dead space and stairs that go to the ceiling without opening into anything. Sarah Winchester's purpose for having the house built like this was to confuse the spirits searching for her from within. She was told by a psychic (I mean flim flam artist) that the spirits of those killed by her family's famous rifles were out to get her so she needed to build onto the house to keep them at bay. I can see that mansion inspiring the doors that won't stay open in Hill House and the Gothic design of the place.

The Ettington Park Hotel in Warwickshire, England provided the exteriors for Hill House in Robert Wise's 1963 film "The Haunting". This 60 room mansion is reportedly haunted. Of course it is. I've never been to this hotel but if I ever travel to England I'd love to spend some time there.

And now I come to Stephen King's "The Shining". The Overlook Hotel was based on both The Stanley Hotel in Estes Park, Colorado (book) and the Timberline Lodge in Oregon (Kubrick movie). I visited the Stanley Hotel in 2015 for the second Stanley Hotel Writers Retreat.  It was a bit on the run down side but still enjoyable. The hotel is of course rumored to be haunted (aren't they all?), but I didn't see or hear anything unusual. Guests included Josh Malerman, Daniel Knauf, and Jack Ketchum. The thing I liked best about the retreat was how informal, cozy and accessible everyone was. I attended some informative lectures and toured the hotel and grounds. I even did some writing. 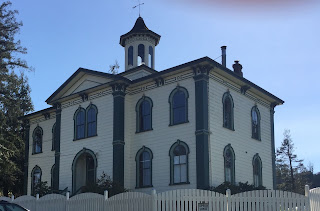 Manderly is based on Menabilly, an Elizabethan-era mansion author Daphne du Maurier first saw in the 1920s while trespassing on the grounds. Two decades later she rented the place and lived in it with her family until 1969. Don't try to find the mansion as depicted in the movie since Alfred Hitchcock filmed on a stage set.

More du Maurier and Hitchcock. Bodega Bay is a very small village located on the northern California coast. I've been there. It's very remote. The Potter house, which was used as the schoolhouse in the film, is now a private residence but I managed to drive past it and get a good picture of it. There isn't much reference to the movie in the village but one shop had pictures of the actors and Hitchcock on the walls.

The Murder House from the first season of "American Horror Story" – The Rosenheim Mansion in L. A. Built in 1908 by Alfred Rosenheim who designed it himself.

The Exorcist – The famous staircase where Father Karras met his end is located on M Street near Prospect Street near Georgetown University. The house where the movie was filmed is a private residence but the stairs may still be open to the public.

E. A Black had enjoyed telling scary stories to a captive audience since she was a child. She grew up in Baltimore, the home of Edgar Allan Poe who has inspired her to write. Due to her love for horror and dark fiction she joined Broad Universe, a networking group for women who write speculative fiction. Her short stories have appeared in Zippered Flesh 2, Zippered Flesh 3, Teeming Terrors, Midnight Movie Creature Feature 2, Wicked Tales: The Journal of the New England Horror Writers Vol. 3, Heart of Farkness, and more. She won a Best Short Story mention on The Solstice List@ 2017: The Best Of Horror for Invisible, which appears in Zippered Flesh 3. In addition to horror, she writes erotica and romance as Elizabeth Black. Friend her on Facebook and follow her on Twitter, where she posts as Elizabeth Black. Check out her web site at eablack-writer.blogspot.com. She lives on the Massachusetts coast in Lovecraft country. The beaches often call to her, but she has yet to run into Cthulhu.

Posted by New England Horror Writers at 5:02 AM

I will always be grateful to authors like you who write about these things, because I've never had the nerve to actually see the movies!